Urdu
MENU
Home > Products > The design concept and how to use the MTR-WFD, the industry-first F-Class Reticle

The design concept and how to use the MTR-WFD, the industry-first F-Class Reticle

The MTR-WFD reticle has been designed specifically for F-Class competition for use in the latest high-magnification March riflescope, the March-X 8-80X56 High Master Wide Angle X (shuriken lock turrets) Majesta. This reticle was designed by F-Class competitors during the actual testing phase of this riflescope, specifically to take advantage of the unique capabilities of the Majesta; the 80X magnification, the shimmer protection of the High Master lens system using Super ED glass, and the wide-angle eyepiece. 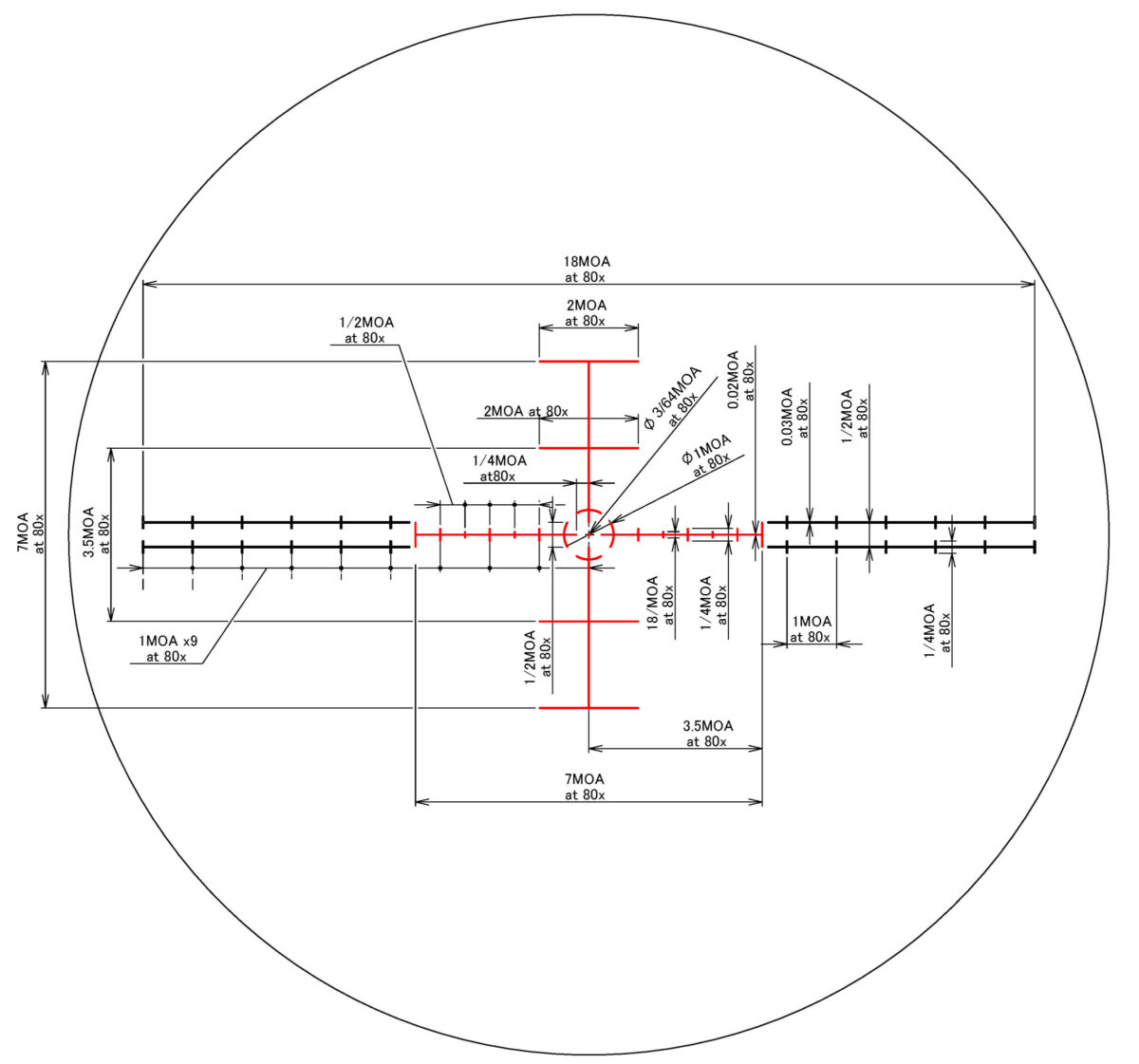 During an F-Class competition, the conditions can and do change from match to match and occasionally during a match. The MTR-WFD reticle was designed to adapt to the conditions by presenting 3 different aiming concepts and cues to deal with the changing conditions without having to touch the windage knob as much as possible. It was also important to keep the central part of the reticle simple and clutter-free.

The MTR-FDB reticle is 18MOA wide at 80X, covering almost the entirety of the wide field of view at all magnifications afforded by the Wide-Angle eyepiece of the 8-80×56 High Master Majesta scope. The reticle is composed of three parts; the 1MOA Aiming Circle inside the 7MOA Frame Stadia, both illuminated, and the two Outer Wings with parallel lines, each staring at 3.5MOA from center and 5.5MOA long for a total of 9MOA each.

When conditions are excellent, with little wind and mirage, it’s time to pile on the X-count with the ultra-precise Aiming Cercle. When the wind starts blowing, the Frame Stadia adds its cues to help keep the waterline when holding anywhere on target or just off it. Finally, when the conditions become extreme, the Outer Wings are used to keep the waterline when holding far off target, without having to touch the windage knob.

The Aiming Circle is a segmented circle designed to focus the eye on the 3/64MOA center dot for utmost precision in excellent conditions. The segmented circle has a diameter of 1MOA @ 80X, the equivalent of the 10-ring. Inside this segmented circle the short stadia line extensions are .25MOA long forming a virtual X-ring around the center dot. The 4 arc segments of the Aiming Circle subtend .5MOA, so each half of these arc segments are .25MOA. All these cues are designed to be unobtrusive and yet assist in the highly precise placement of the reticle on the face of the target in excellent conditions from 80X magnification down.

The vertical lines only have two horizontal lines, the middle one denoting 3.5MOA @ 40X and the top horizontal line for 3.5MOA @ 80X. In periods of bad mirage, it may be easier to identify the top of the target frame compared to the inner circles on the target and these cues are designed to help hold waterline. These top and bottom frame cues are useful even when holding just off target as they subtend 1 MOA on each side of the vertical line for use up to 4.5MOA away from center at which point the Outer Wings are already available to help hold the waterline.

The central horizontal lines have tall hash marks at each MOA and shorter ones at the .5 MOA point. These single lines end at a distance corresponding to the target frame size at 1000 yards, 3.5MOA from the middle of the target, where the Outer Wings take over.

While the Frame Stadia cues are designed for the NRA/ICFRA target frame at 1000 yards, they can still be useful at 600 yards as they will bracket just inside the 8-Ring @ 80X and just inside the 6-ring @ 40X.

The outer wings of the reticle are the two segments with parallel lines on either side of the illuminated section. These outer wings start at 3.5MOA from the center of the reticle @ 80X. The parallel lines are .5MOA apart, the diameter of X-ring. Having parallel lines makes it easier to bracket the X-ring when holding off target. The outer wings have hash marks at every MOA and extend 5.5MOA for a total of 9MOA from the center of the reticle. This provided for a total coverage of 18MOA from end to end. This covers virtually all the 18.75 MOA FOV of the Majesta @ 80X. This wide FOV allows for viewing the competitor’s complete target at 80X, along with half or more of the two adjacent targets at 1000 yards.

The outer wings would only come into play in extreme conditions and with their dual line design, they will help keep the rifle level in all conditions.

In periods of intense mirage, it may become necessary to dial down the magnification and the MTR-WFD reticle was designed to provide Frame aiming cues at 40X magnification. All the measurement detailed earlier are simply doubled for 40X, except for the two middle horizontal lines, above and below the center line. These lines are dimensioned at 3.5MOA @ 40X to hold the top and bottom of the NRA target frame at 1000 yards @ 40X.

The reticle measures 36MOA from end to end @ 40X, which covers virtually all the 37.5MOA FOV of the Majesta @ 40X. The competitor can usually view their target, both adjacent targets in full and at least half of the next targets at 1000 yards @ 40X.

F-Class competitions take place in all kinds of conditions that can change throughout the day. The MTR-WFD is designed to adapt to anything Mother Nature can and will throw at the F-Class competitor without having to touch the windage dial.

The MTR-WFD reticle is the first one ever designed specifically for F-Class shooters, and it can also be used for any other high-precision, high-magnification shooting discipline.