Today I’d like to introduce and to also explain the difference of three March FFP LPVOs. 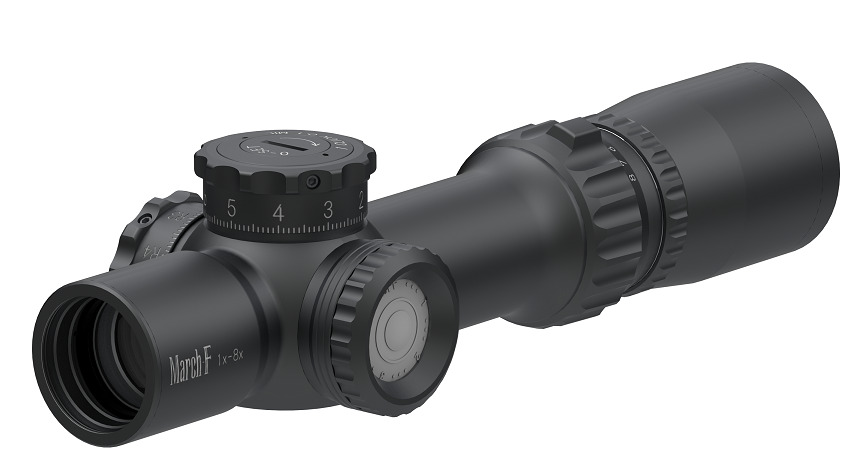 *All three scopes have Elevation and Windage travel amount of 56MIL.
● Side focus adjustment
1-8x24Shorty has a 100 yard fixed focus.
As the side focus is fixed, you do not have to adjust each time and this makes the scope’s weight lighter.
1-8x24Shorty is beneficial for those who wants to keep their gears as light as possible and for those whose time is restricted.
A normal 1-8×24 and also the 1-10x24Shorty have a side focus turret with adjustment range of 10yd- infinity.
With the adjustable side focus, you can get a clearer image according to the distance.
● Length & Image quality
This article explains the detailed mechanism of a scope.
https://marchscopes.com/news/6731/
If two scopes have the same specs manufactured by the same manufacturer,
in theory the longer the scope is, it will have a better Image Quality.
This is because the longer the riflescope is, the less the light is bent
along the optical path and thus less chromatic aberration is produced.
Therefore we can say as following.  Image Quality : 1-8x24Shorty <1-8×24
However as our new 1-10×24 has a great lens system, even if it is shorter than 1-8×24, it has a superb IQ.
(In conclusion)  Image Quality : 1-8x24Shorty <1-8×24 <1-10x24Shorty
● Exit pupil

There is an indicator called “exit pupil” to show the brightness of the image.

the eyepiece lens (lens close to your eye) being distant for more than 30cm.

The larger the exit pupil is, the brighter your view will be.

A Scope with large exit pupil will be effective when hunting at dawn or at dusk.

If the exit pupil exceeds 7mm at the employed power, then you can see the same brightness as the naked eye even under dark condition.

At a same power, the larger the objective effective diameter is, the more you can collect light and the brightness will increase.

1-10x24Shorty has the largest exit pupil (compared at 1x) among three FFP LPVOs.
● Fast focus eyepiece
The diopter adjustment mechanism has been improved so you can adjust the eyepiece to your eye faster than ever before.
Fast focus diopter system will enable you to adjust from -2D to +2D in one revolution.
This is only assembled in 1-10x24Shorty among three FFP LPVOs.

● Dual reticle assembled in 1-10x24Shorty
The newest March Dual Reticle assembled in 1-10x24Shorty has advantages of both SFP and FFP reticle.
Reticle scale is placed on the First focal plane and a daybright fiber dot illumination and the cross line is placed on the Second focal plane.
It has the convenience of the FFP reticle scale which magnifies and reduces according to the magnification
and the usability of the SFP reticle with the constant thickness (to the eye not the scale value) of the line as the magnification changes.
Placing the bright fiber dot illumination to the Second Focal plane reticle ensures that the illuminated dot is usable across the entire magnification range; from a dot sight at low magnifications to a precise illuminated dot for long range precision shooting at higher magnifications with the use of the scale.

● Unimount for 1-8x24Shorty and 1-10x24Shorty
Shorty custom Unimount is specially designed for March 1-8x24Shorty and 1-10x24Shorty Dual reticle scope
as the tube diameter for these scopes slightly differ in the front(33mm) and at the rear(30mm).
You can place 2 rings or a single mount at the rear tube, but the test conducted
by the ring manufacturer shows that POA will shift 1/2mil with a single mounting point.
With March’s unimount, shooters will be able to achieve higher levels of precision. 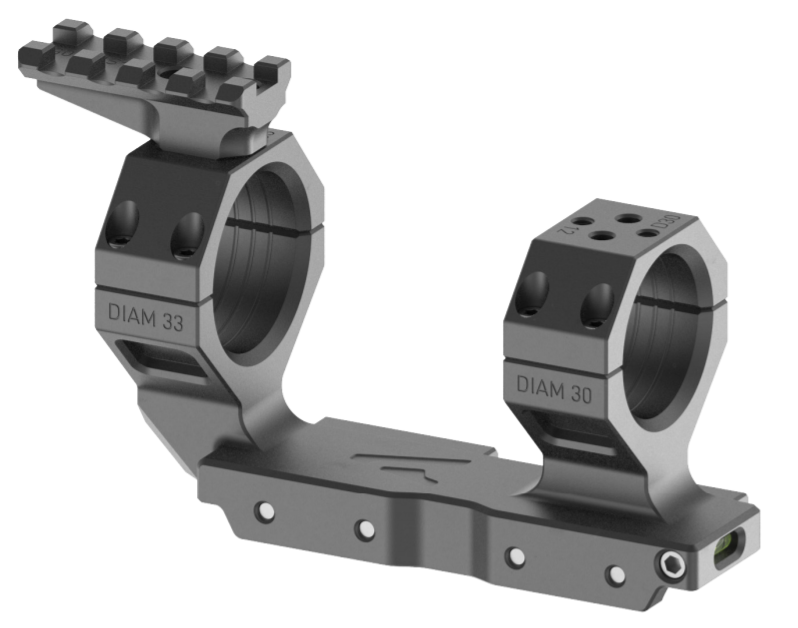 We are a small custom manufacturer, but we will keep innovating to try our best to live up to each and every shooter’s requirements.